Heavy Paula and other lucky breaks for Reutter and the Porsche 356.

Night shift: finished Porsche 356s in the yard of the Reutter works in Zuffenhausen, awaiting dispatch on the next day. (© RECARO) “In the beginning I looked around and could not find quite the car I dreamed of. So I decided to build it myself.” This famous quote from Ferry Porsche describes the genesis of a legend, the first sports car bearing the family name: the Porsche 356. In part 3 of this look back at the sports car history shared by RECARO and Porsche, we dive into the fascinating 356, with its breathtaking curves, aerodynamic design and rear-mounted four-cylinder boxer engine, dive into the “adventure in mass production” at Stuttgarter Karosseriewerk Reutter (the predecessor of RECARO) – and into the countless details and anecdotes that have come down to us from the 356 production era. Here are a few examples: The big order was issued verbally. It was given by Ferry Porsche in October 1949: a firm commitment for 500 bodies and frames from Reutter for the Porsche 356. Time was of the essence, so Reutter began the preparations, needing to order new machines and arrange facilities – all with implicit trust in the given word. It was only weeks later that a written contract confirmed the order. But the work had already been long underway. Eagle eyes: In March 1950, Ferdinand Porsche arrived at Reutter in Stuttgart’s Augustenstrasse, along with his son Ferry Porsche and design engineer Erwin Komenda, in order to inspect the first body-in-white manufactured by Reutter for the 356. He circled the body while considering it in imperturbable silence, before finally settling onto a stool in front of it. And after a while, he decided it had to go back to the workshop: it wasn’t symmetrical. Porsche was right: later measurements revealed that the body was shifted 20 millimeters to the right of the centerline. For everyone involved at Reutter, it was an inspiration: they respected their customer’s knowledgeability and high quality expectations, and applied their entire expertise to supplying Porsche with a first-class product. No parts without Paula: Reutter manufactured the first coupes at the headquarters on Stuttgart’s Augustenstrasse. A handpicked team of car body specialists welded the individual sheet-metal parts into the perfectly formed outer skin of the 356 coupe. Smaller parts were wrought by hand over wood, while the larger drawn and pressed pieces were supplied by their colleagues at the second Reutter plant in Zuffenhausen, where the big press brake nicknamed “Paula” had doing her job. Actually, she should have been confiscated by the French occupiers, but was too big and heavy for transport. A blessing for Reutter! Cigar lighters and key pouches: At Reutter, the order for the Porsche 356 involved not only the delivery of car bodies and frames, but also the manufacture of seats and the entire interior trim, along with the installation of electrical and heating systems. Porsche also entrusted Reutter with the final inspection of the finished vehicles. Diverse options were included from the very start, so that even in 1950, every buyer had a choice of eight colors for the paintwork and seven fabrics for the seat covers, as well as four different leatherette covers. Even before the first production vehicles were delivered (each with two door keys and two ignition keys in individual pouches), there was already talk of optional extras, such a secondary car horn, a cigar lighter and a radio, as well as genuine leather seats and side panels. A two-paned windshield with central divider? While unthinkable today, it was one of the hallmarks of the first Porsche 356, up until April 1952. Although curved glass was already available, it was expensive. Incidentally, this characteristic was also something that the Porsche 356 shared with the Volkswagen, whose famous rear “pretzel window” (with two flat, distinctively shaped panes, divided by a metal upright) was developed as an ingenious cost-saving expedient. The logo: Every 356 manufactured by Reutter can be recognized by the coachwork label showing the Stuttgarter Karosseriewerk logo – it was affixed inside the A-pillar of the roof panel, with another one always outside on the right, between wheel arch and door. And while the first Porsche 356 did carry the Porsche name on the hood (using individually applied letters!), at least one early 356 customer was already yearning for a distinctive company logo. A “Porsche Prize” competition was set up in 1951, with the goal of creating a logo for the sports car company. Since none of the submissions was persuasive, Ferry Porsche and his engineer Franz Xaver Reimspiess quickly designed the now world-famous Porsche emblem themselves, with its rearing black horse. The emblem began adorning the steering wheel in late 1952, before it was then added to the hood in 1954, placed above the Porsche lettering and integrated into the hood latch. Initially brought to market as a niche product, the first Porsche sports car developed into a worldwide success. Instead of the originally planned 500 cars, 78,000 Porsche 356s had been sold by the end of its production run – most of them built at Reutter. Next week on the RECARO blog, we’ll look at the iconic Porsche 911 – and how Reutter participated in its genesis. 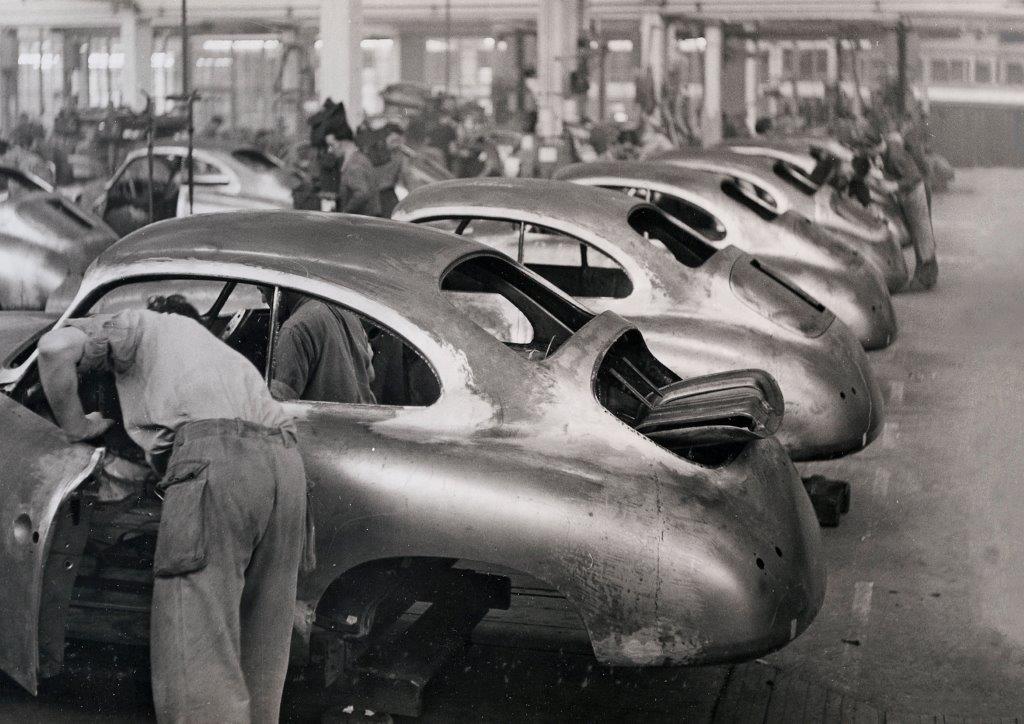 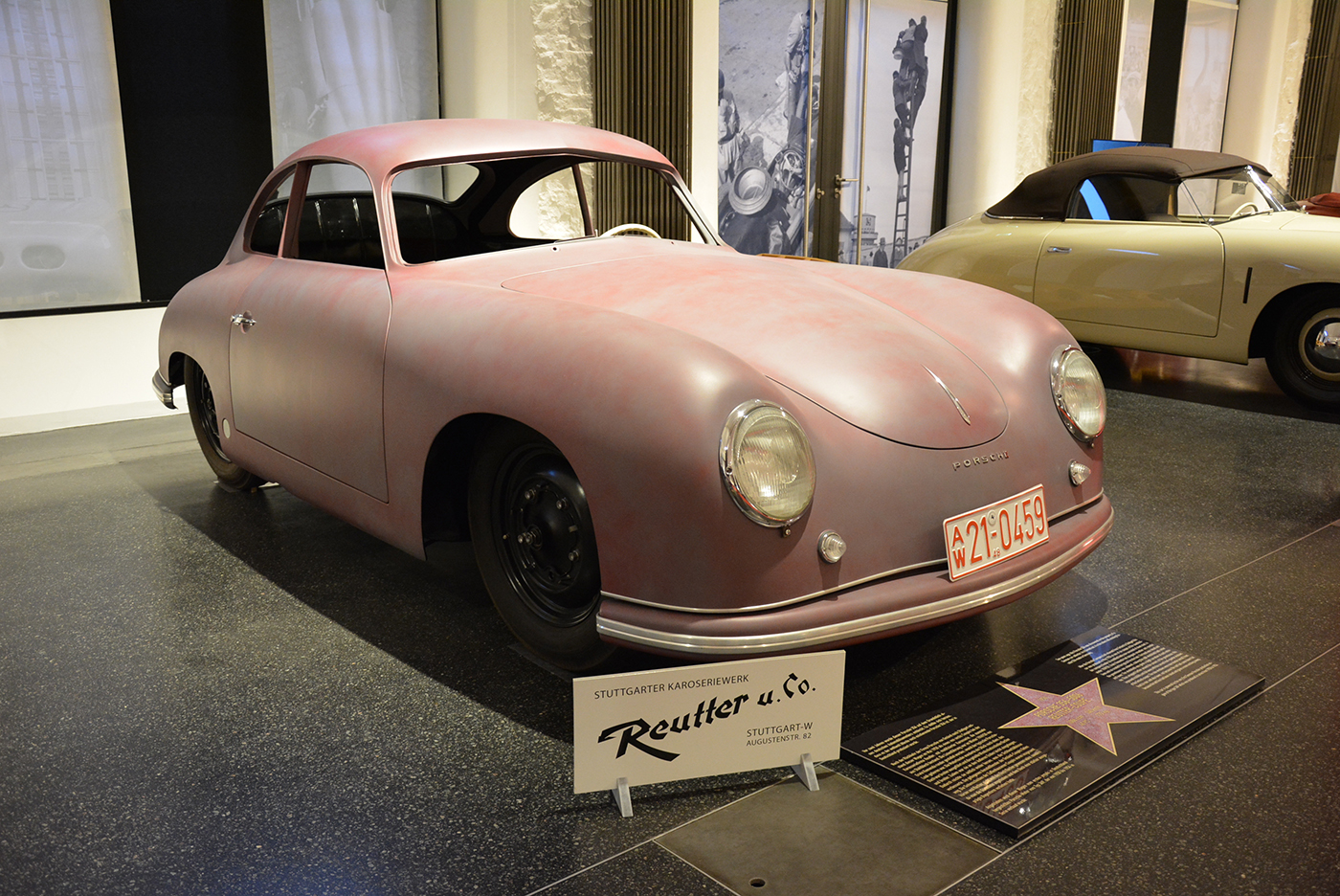 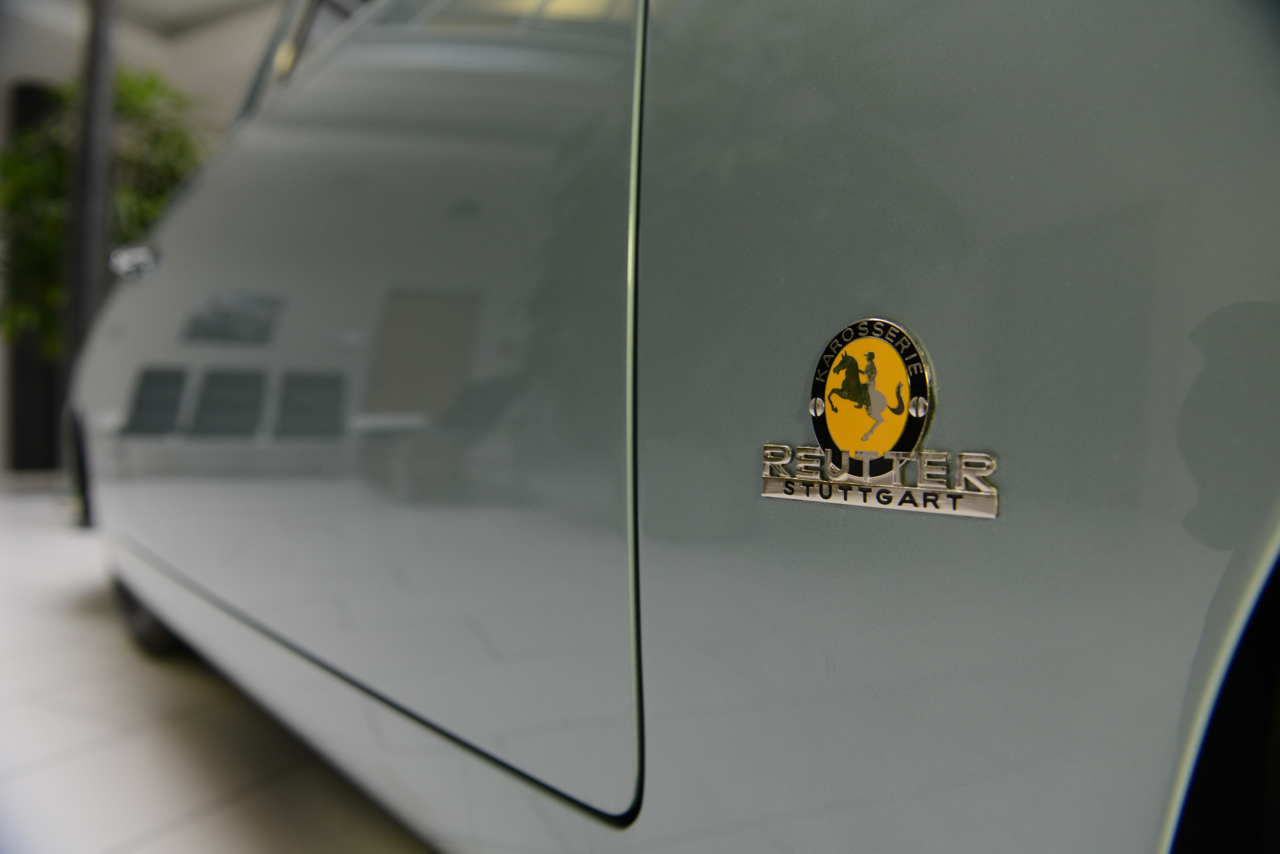 Proof of origin: every Porsche 356 manufactured at Reutter carried a nameplate from the coachworks, as seen in this early example. (© RECARO) From a single source: Reutter also supplied the seats and the entire interior trim for the Porsche 356. (© RECARO) A fast seller: it was barely a year after production launch that the 500th Porsche 356, a coupe, rolled out of the yard of Stuttgarter Karosseriewerk Reutter. (© Automuseum Prototyp) 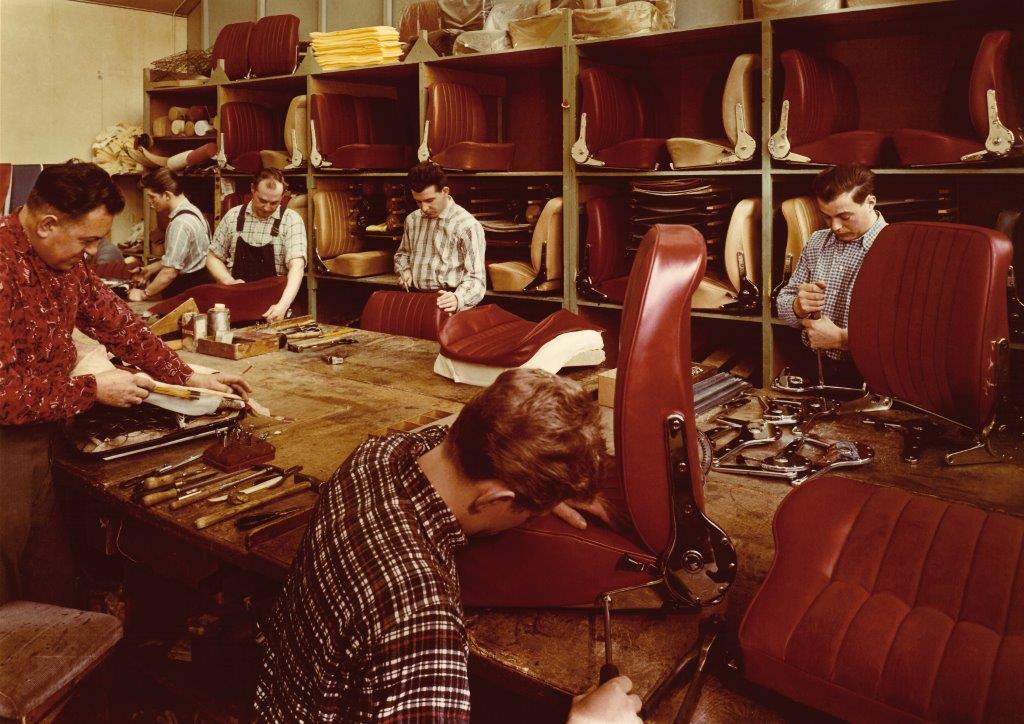 The finest craftsmanship: seats for the Porsche 356 coming together in the trim shop at Reutter, with a driver’s seat featuring Reutter recliner fittings in the foreground. (© RECARO) 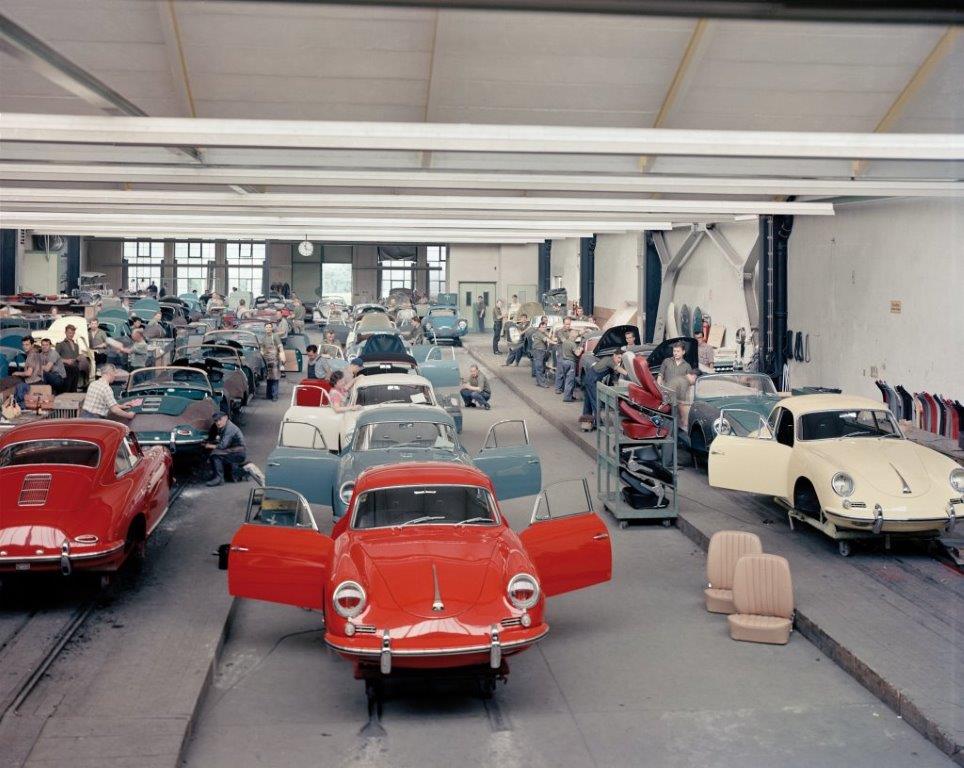 Diverse options: there were many possible variants of the Porsche 356 in terms of model, colors and equipment. A view of the final assembly at Reutter. (© RECARO)