At this year’s European Truck Racing Championship, RECARO Automotive Seating is supporting Team S.L. Trucksport 30. With mother Silvia Lenz as its leader and son Sascha at the wheel of the 1,000-horsepower MAN truck, the team is a true “family business”. Thirty-year-old Sascha Lenz has been competing in European championships since 2015. This year, he is enjoying the support of RECARO Automotive Seating for the first time, seated in a Pro Racer SPG racing shell. He has a quick answer for what fascinates him about truck racing and what drives him: a passion for racing, the incomparable atmosphere on and off the track, and, of course, the incentive to become European champion. It’s an ambitious objective that the amiable chap from Germany’s Eifel region is keen to pursue together with his team. His goals for this year’s EM are thus to finish among the top five and perhaps even take the team title with Stephanie Halm. The second weekend of racing in Misano, which put them second in the team ranking, is an indication that they may be on course to accomplish the latter goal. Sascha Lenz plans to make truck racing his main business over the coming years, and even plans to expand his family racing team. “Truck racing is a very special passion,” so the father of a young daughter. Lenz appreciates the sport’s unique family atmosphere and extraordinary cohesiveness. “In truck racing, the other teams will help you out with motor oil if you happen to run out. When problems arise, we work them out together and share our know-how. Of course, once we’re out on the track, it’s all very different. Then it’s ‘survival of the fittest’ and the competition is fierce!” On his race to the top this season, Lenz will be sitting in a RECARO Pro Racer SPG racing shell. And how does it feel? “Unusual,” he says, but after two days of “test sitting” and with the first race behind him, he’s keen to keep fighting for the title! “Having such a strong partner at your side is a great feeling. And seeing your own name stitched into such a premium racing shell just gives you goose bumps.” Shortly before the race, the tension is rising. One thing Lenz needs then is, of course, a kiss from wife Kristina. And second: Rammstein or AC/DC good and loud just before the start.  But, for the sake of a happier mood, Helene Fischer tunes are permitted in the workshop. When asked for an insider tip, and about his formula for success, Lenz made an important point: It’s all about team spirit. “When the work you do is no fun, you won’t like doing it. And if you don’t like doing it, you won’t give it your all,” he remarked. For Sascha and his team, giving their all means already planning mentally for the next race while packing up after a weekend of racing. What can we do better? What are our weaknesses? “Once you catch this fever to win, you never lose it.” he said like a true-blooded racer. 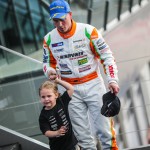 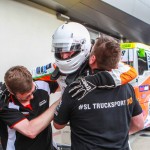 Working on the MAN truck