Over one quarter of a century ago, the company history of G-Power began the modification of the BMW 02 models. This tradition is being carried on by the G-Power Motorsport Division, created at the beginning of 2010. Part of the area of responsibility given to this newly founded department is the round-the-clock service for motor sports clients and also the development of complete vehicles. The first creation of the G-POWER Motorsport Division was viewed and admired in the 24 hour race at the Nürburg Ring and at the Tuner Grand Prix in Hockenheim. The G-POWER M3 GT2 S is especially targeted toward clients, who desire a car like the Porsche 911 GT3 RS, but until now have not been discovered by BMW in their product program: Pure-bred racing sport technology combined with superior performance and road approval. In terms of performance, the M3 GT2 S makes best use of the powerful SKII CS compressor system. This system, after intensive development – from the CAD development to the building of the first prototype and the subsequent test driving and hot country testing in the United Arab Emirates – has set new standards in performance and quality. The heart of this compressor system is the high-power ASA T1-522 radial compressor which also performs its service in a similar fashion in the ALPINA B6 GT3 race car. A Dual-Flow Carbon Air Intake, a voluminous charge air cooler made from aluminium casting, as well as an aluminium cast airbox make sure that the maximum charging pressure of 0.5 bar rels can also accomodate for a performance of 600 HP and 580 Nm. So that the increase in performance does not create additional weight, G-POWER uses a Titan exhaust system with fan-type exhaust pipes and 2x100 metal catalysers, which dramatically reduce the weight. The advantage in weight over the exhaust system of the series is an impressive 26kg. G-POWER plays with the weight issue and slims the BMW M3 down piece by piece. The G-POWER GT2 S has a full carbon body kit in the current GT2 design of the spoilers, which replaces all four mudguards as well as rear valances with ultra-light carbon elements. A carbon front lip and multiple-part carbon tail planes improve the aerodynamic output. A further area of improvement for G-POWER was the wheels. Newly developed SILVERSTONE CLUBSTONE light metal SILVERSTONE RS rims, 9.0x20 and 11.5x20 inches in size reduce the mass of the GT2 S significantly and make for better acceleration and more agility in the curves. Sufficient road grip is taken care of by the MICHELIN Pilot Sport Cup Pneus in the dimensions 245/30 R 20 and 315/25 R 20. The G-POWER “CLUBSPORT” package is neutral in terms of weight but not without effect. It boosts the way the BMW M3 drives to race track standard and is comprised of a screw thread that can be adjusted in terms of pressure and draught separately, a stabiliser kit for the front and back axes, as well as a mount, which allows correction of the drop and lag. In the car’s interior, G-POWER swaps the front seats of the series for race shells made of carbon from RECARO, which not only perfectly support the driver in the battle against centrifugal forces but are also 12kg lighter than their series counterpart. This means a further 24kg of weight reduction. The G-POWER M3 GT2 S also does away with the complete back seat, at the same time the interior is improved with individual G-POWER leather finishing. Leather and Alcantara applications in G-POWER Orange with blue decorative stitching give the sporty, Spartan interior a superior and luxurious appearance. In total, the G-POWER weight optimisation amounts to approx. 150kg for the M3 GT2 S and so the dead weight is less than 1 500 kg. This makes it easy for the compressor charged 600 HP. The GT2 S sprint from 0-100 km/h is 4.1 seconds. The maximum speed is limited by the gear translation. The 6 gear manual gear box has a maximum speed of over 320km/h and for the 7 gear it is over 330 km/h. 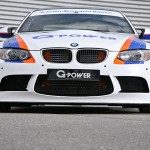 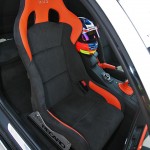